Kintsuba is one of the Wagashi(Japanese traditional sweets).
They are made from anko(red bean pastes) which was dipped into the very light batter and cooked. 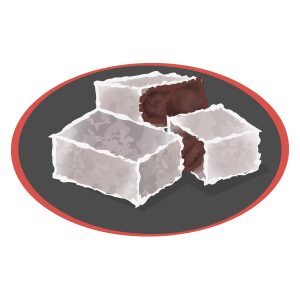 They usually have the shape of hexagon.

However, Eitaro’s Kintsuba which are sold in Nipponbashi are round.

The question as to why they call them Kintsuba even though they have different shape came up into my mind and I asked Mr Masaki Hosoda.
The following is his answer to the question.

The definition of “Tsuba” is the circle thin plate which separate the handle from the sword, so called a hand guard. 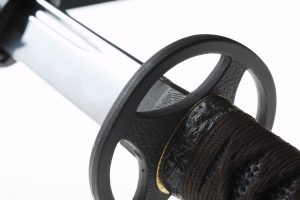 They melted rice flour with water and then covered Anko(red beans pastes) with it. At that time they were called Gintsuba because of the shape and the color. (Gin means silver in Japanese). The texture was rather squishy and elastic.

After a while, they started selling those sweets in Edo(Tokyo), cooking them on the iron or bronze plate in the food cart. Since they replaced rice flour with wheat, those sweets became more solid, changing the name from GIntsuba to Kintsuba. (Kin means gold in Japanese).

In short, they were called Kintsuba because of the resemblance to the shape of a hand guard in the sword.

They made it clear that the main of Kintsuba is Anko (red beans paste) by making its skin as thin as possible.

They only use pinky’s fingernail size of dough and extend it. How thin they can make their Kintsuba’s skin is what they used to compete with against each other. Of all of them, Eitaro distinguished themselves as the most popular store, supported by the majority of Edo citizen and built reputation that their Kintusba has thin skin and filling Anko(red beans paste). You can also tell the large popularity of Kintsuba in Edo from Senryu(Japanese short poetry similar to Haiku).

They wanted to jump in the bandwagon and start selling popular products. As the matter of fact, the number of Kintusba store has increased.

However, one of the drawbacks is that it is very difficult to make Kinstuba with extremely thin skin. It requires professional skill to extend the dough until it becomes extremely thin and wrapped Anko(red beans paste) with it.  Only professional cooks with special technique are entitled to make them.

If you want to make Kintsuba more and sell them more, it is very natural that you come up with the idea of making those sweets more simple and easy to cook. That’s why they started selling hexagon Kinstuba because it is much easier to make compared with the round Kintsuba. They introduced the new idea of adding the agar powder to make it like Yokan and coating it with wheat before frying. By changing the method and shape, it took less time and money to produce more Kintsuba. This contributes to the increase number of Kintsuba stores.

Thus, Eitaro Sohonpo and few store left that make round Kintsuba in Japan.  They adhere to the traditional principles and method which requires professional skills. That’s why Eitaro’s Sohonpo Kintsuba is round and called “original” Kintusba.

What set Eitaro Sohonpo’s Kintsuba apart from the others is also Anko, which is very simple with no unnecessary ingredients. I would you like to enjoy Eitaro’s original Kintusba. 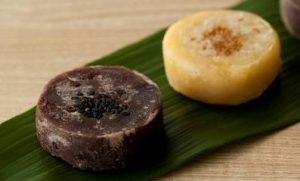 You can buy those Kintsuba in Eitaro Sohonpo Nipponbashi store. However, if you want to eat them shortly after being made and enjoy the baked smell, I recommend that you go to Eitaro Sohonpo in Nihonbashi-Mitsukoshi department store at time they actually make Kintsuba and show the customers.