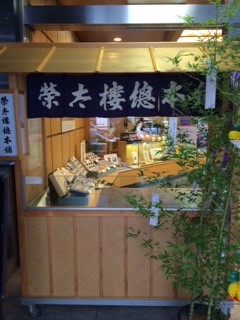 Eitaro Sohonpo in Tokyo, Nipponbashi is known for the old Japanese traditional sweet store which started off with Kintusba. 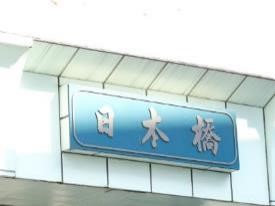 Mr, Masaki Hosoda told us about the time at which Eitaro Sohonpo was established.

It was in the latter half of Edo period, 1857, when they built Eitaro Sohonpo at Nipponbashi, the current location.

The store was opened by Yasubei Hosoda Ⅲ. His childhood name was Eitaro and he started working to help his father make Wagashi (Japanese traditional sweets) at an early age.

He sold his Kintsuba or Daihuku with using the food cart at the east side of Nipponbashi.

Since he started helping his father sell their products when he was very young, after he took over the store, the reputation as Eitaro’s Kintsuba hasn’t waned at all.

At that time, there was a big harbor in Nipponbashi. The majority of the customers of his store was men who were working there. They dropped by his store for delicious sweets on the way home from workplace to grab a bite when they got peckish. 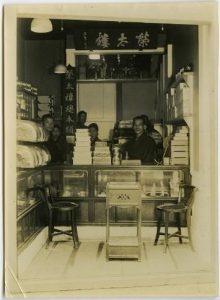 He’s built the reputation for generous Kintsuba that have very thin and almost transparent skin and filling Anko. Since his Kintsuba was amazing and he was working his tail off after he lost his father, a lot of people were impressed and supported him which is the contributing factor in him owning the small store on his own at Nipponbashi. It was when he was 25 years old. This is the initiation of Eitaro Souhonpo. He named this store after his childhood name so that it reminded him of his gratitude toward the people in Nipponbashi who had helped and supported him since he had started selling Kintsuba in a food cart and also they kept calling his products “Eitaro’s Kintsuba”.

Even after 190 years since then, they hold on to some part of the origin store so as not to forget yearning for more sophisticated flavor to satisfy the customers. If you step inside the store, you will see the square underneath you. It is as large as four and half Tatami and equivalent of the breadth that the customers bought his sweets in 1857. ( This rock Tatami is part of the rock which was actually used in the origin store. 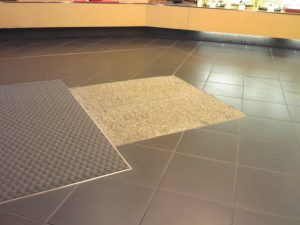 Eitaro Sohonpo has adhered to the old method and principles and continued to make the same Kintsuba as the one made 190 years ago. If you have an opportunity to visit Nipponbashi, enjoy origin round Kintsuba and see the rock Tatami and reconstructed food car.