Don’t you take it for granted that Wagashi is the sweet for women? 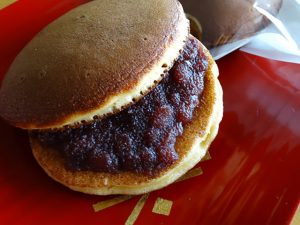 The truth is, if you look into the history of Wagashi you might notice that Wagashi, such as Kintsuba, Daihuku, sakura-mochi, or Imagawa-yaki were created to support men in Edo period.

The background of Wagashi

Sugar permeating among common people was a contributing factor in the widespread popularity of Wagashi. Thanks to the policies by Tokugawa Yoshimitsu, they finally got around to replacing the expensive imported sugar with the cheap one made in Japan.

It was also when Kintsuba, Daihuku, sakura-mochi, and Imagawa-yaki were born. 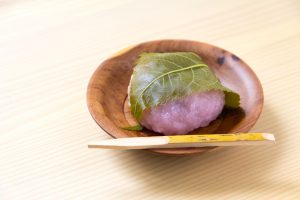 Those Wagashi used to be sold at foot carts, purchased by mainly men.

Men accounted for the majority of population in Edo (current Tokyo). It is because numerous men had to go to Edo in the process of *Sankin-Kotai. They had no choice but grab a bite to eat at food carts because it was prohibited for craftspersons or merchants to make meal on their own at Nagaya(long shared house). Heavy digesting slows them down, so they eat small amount of food for many times a day.

This kind of style was embraced by a lot of hasty Edo men.

Once you get to know the history of those sweets there is no wonder all of Wagashi born in Edo period- Kintsuba, Daihuku, Sakura-mochi, or Imagawa-yaki- are efficient food to gain essential nutrients and energies in a short time.

I found it interesting that those energetic sweets made for men established the current Wagashi, which I love enough to want to eat every day. There are two ways of enjoying Wagashi. You can eat them luxuriously in a special time, along with green tea or you can eat them to gain energy and cheer you up when you fee down. That’s why you feel satisfied when you eat Wagashi.

*Sankin-kotai … It was a policy of Tokugawa. He made all major feudal lords make frequent travel to Edo in order to strengthen central control and restrict their lavish lifestyle.