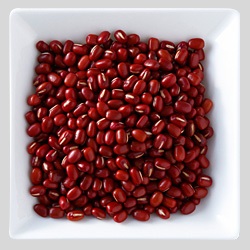 ~ Sent, how to preserve, how to produce can change the flavor~

Contains a lot of starch?

Azuki is deeply ingrained in Japanese society and it has been used as medicine for many years. Now we eat them as Wagashi and Seki-han.

In the process of cooking, starch has saccharification but it doesn’t transform into liquid. It’s captured into the cotyledon cells. Ann’s grain is pulverized the cell, which contain starch. The size and quality of Ann’s grain is what determine the taste perception when you eat Wagashi that has Anko.

The size of Ann’s grain determine the taste perception

Taste perception plays pivotal roles in deciding whether you find this sweet delicious or not, especially when you eat Anko.

In the process of cooking, various kind of component elute from Azuki. Among all of them, unwanted component, such as tannin is included. Generally tannins are get rid of by disposing the water that are used to boil Azuki. Tannin; the cause of astringent taste are different from each other based off of where and when those Azuki are made. When you compare each Azuki’s amount of tannin, it is said that Dainagon has less tannin than small Azuki. On the other hand, the imported Azuki from China has a large amount of tannin, especially Tonbei-honto(chinese northeast azuki) and Hoafei-honto(Chinese north area azuki).

The amount of tannin fluctuates depends on where and when those beans are made. Even though those beans are same kind, it is not unusual that there is more than 10 % difference between them. The duration of grain filling and climate are the contributing factor in this difference. The longer they are subjected to the sun light, the more tannin they include.

Flavor is also important factor in deciding the deliciousness of Azuki. Volatile component that exist under the skin of Azuki produce various kind of scent. Azuki has maltol/ that dispense sweet scent. However, the amount to those scents is not the only factor in deciding flavor but the condition of preservation or the process of cooking are. Azuki that has a lot of tannin, such as Chinese Azuki require twice

It goes without saying that what kind those bean are and where they are made are also main factor in variety of flavor. The deliciousness of Azuki consists of taste perception, components, scent and color. Flavor is the result of all of them.