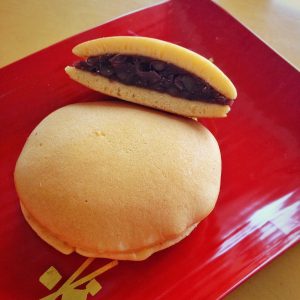 This pancake was named after the musical instrument, Dora (Gong in English), which has the rounded shape and just looks like it. The origin of this cake goes back to Heian era (794~1192) when Japanese samurai named Benkei used the gong to fry this pancake while he was hiding in the farmer’s house and served in order to repay them for helping him. He made the first Dorayaki by stirring flour with water and covering Azuiki red bean paste with them. Today, this cake consists of two small pancakes wrapped around red bean paste. This current style was established by the Japanese traditional wagashi shop “ Usagiya” in the Ueno district of Tokyo and spread across the country. The alternative name of this pancake is Mikasa because of the similarity of the shape with the Mt Mikasa in Nara prefecture.

This pancake is also famous for Doraemon’s favorite food.

The salient feature of Japanese Dorayaki is that it includes honey and Mirin (a type of sweet rice wine similar to sake) besides flour and egg.

This is not categorized into the luxurious Japanese sweets though, we have bunch of wagshi shops that are particular about the dough and red bean paste. This sweet is very popular in Japan and you can even buy every convenience store.