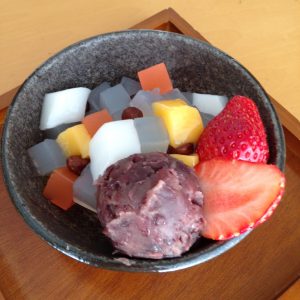 It is made of small translucent cubes of agar jelly and served in a bowl with sweet azuki(red beans paste), boiled green peas and mitsu( sweet black syrup). Without red beans paste, it’s called “ mitsu-mame”, and with them, it’s called “ animitus”. It is said that this sweet was invented relatively recently (around 1930) somewhere in the Ginza strict in Tokyo.

You can enjoy this sweet as adding some fruits or ice cram, just like parfaits. Some of popular choices are milk or green tea ice cream, dry fruits, banana, apple, orange, gyuhi (soft variety of rice cake). This sweet usually comes with a small pot of sweet black syrup, no matter what you add.

Back to 1930, Japan was in Showa era when people enjoy having nice time over coffee at the cafe called “ mobo・moga’. It was also when European culture were just flourishing. Unfortunately, those culture begun to shrink due to the World War Ⅱ. However, I assume that this sweet was epitome of Japanese sweets people tried to make against European culture which was conspicuous at that time.

This sweet used to be served at expensive cafe. But taking sweet anko (red beans paste) into consideration, no wonder this has become one of the most popular Japanese sweets.

There is a store that invented anmitus for the first time in Tokyo, called “ ginza-wakamatus”.