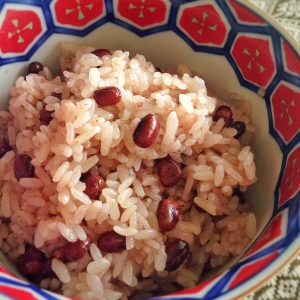 Sekihan is a Japanese traditional dish. It is sticky rice( mochi-gome) steamed with red beans. They get mochi-gome permeated with the water used to boil red beans after it gets chill. In order to make sure that the rice will turn into immaculate red color. Oxidize the water before permeate them. This dish is often served on special events or occasions throughout the year in Japan, such as celebration.

Japanese people have eaten red beans for quite a long time. However, the origin of Sekihan is rooted in old Shinto rituals. Long time ago, Japanese staple food was Indica rice (red rice), and it was offered to the god. As time passed, in Edo period, short and medium grain rice (Japonica rice) became popular and took place of Indica rice as the sacrifice to the god because it tastes better. However, since the color red was considered to have magical powers in Japan, they started making the rice red by steaming red beans and Japonica rice.

In Japanese book, “ Onita no Boushi”( Onita’s hat), Sekihan in mentioned as the feast to celebrate the spring. This celebration is called Setsubun. It takes place in  February where Japanese people throw roasted soybeans out the door to repeal the Japanese demon or ogre, Oni. The Oni child, Onita was edged out from the house he used to live on the day. The outside was so cold and dark, he looked for another house but human put sardine head talisman on house entrance to keep demons away and he could not get in. However, there was only one house without this plant and throwing the roasted beans. In this house, a girl and sick mother lived together. The girl kept vigil beside her mother’s bed all days and did not have enough time and money to eat meal, not to mention throwing roasted soybeans. Realizing the predicament they were in, Onita found meal from somewhere. Disguising as a man, he offered the meal he got to the girl, saying that he made too much meal for Setsubun. The meals he offered were Sekihan and green bean dish. In this story, while the description, such as demon being repelled from the house, a girl drinking a cold water are quite sad and depressing, the scene where a girl ate Sekihan only makes you feel warm.

You can buy Sekihan rice ball in convenience stores or supermarkets in Japan. There are some recipes you can make Sekihan with microwave. Eat them while they are still warm.